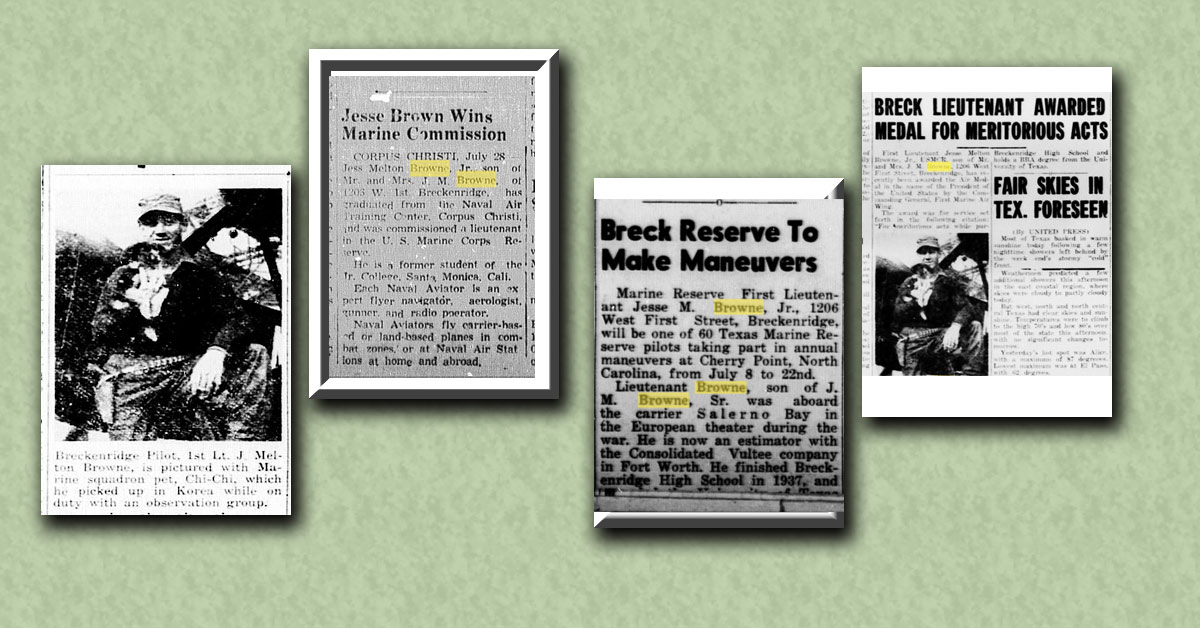 The story of Marine – Jesse Melton Browne Jr. and tips on finding his history using newspapers!

I absolutely love it when things just come together and I knew there was a reason.

It seems that I always find something in common with my subjects and this one lived close to my home town at one point in his life.

I love all the mysteries and the thought that there was a reason I found this story!

There are many sources for newspapers – think outside the box


While on a search to help a new fellow Texas genealogy friend that I made today I needed more than I was finding on my normal research sights. So today’s tip is, if you can’t find it go to Google and go to the town where the family lived and search for newspaper archives.

Type in only the surname for the search so you can read about any family member. Sometimes you get really lucky like I did today!


In this clip we learn that Melton was home visiting and addressed as Captain, and that he was leaving for Pensicola, Florida. There is a lot of other information that will be a great addition to the tree about other family members.

Today I found a heart-tug story while doing some research. From Breckenridge, Texas a Marine is home from the Korean War dated Friday, July 6th, 1951. Captain Jesse Melton Browne of the Marine Air Corps had been gone for six months and was an air observation squadron pilot.

He had a record of being one of the only two in his group that had gone without losing his plane or being wounded. He had flown 175 mission in Korea.

Building a time line – You will not find them in order

The son of Mr. and Mrs. Jesse Browne had been called back to service from his reserve status on August 1st of that year. He had already served thirty eight months of action during World War II at Okinawa, Formosa and Saipan. He shipped out this last trip on August 15th to the Itami Air Force Base landing in Japan on August the 28th. He worked doing administrative work and then joined the observation squadron headed to Korea on December the 9th. 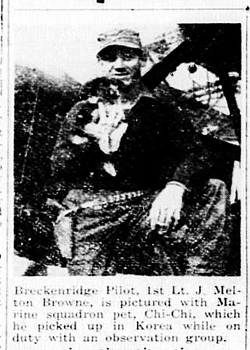 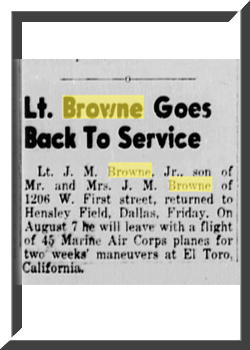 During his time there his group was the direct support of the First Marine Division, calling the fighting “guerrilla warfare”. After a short time home and receiving his Captain ranking he will be reporting to Pensacola, Florida to be a flight instructor.

Captain Melton Browne graduated from high school in 1937, Breckenridge, Texas and then received a degree from the University of Texas in 1950. 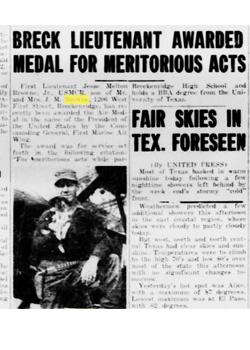 Breck Lieutenant Awarded Medal for Meritorious Acts – and I love finding pictures of people in the newspaper, especially with his dog. This article shares with us that USMCR Browne had recently been awarded the air Medal in the name of the President of the United States by the Commanding General, First Marine Air Wing. The medal was given for flights from December the 10th 1950 to January 28, 1951.

First Lieutenant Browne had successfully completed ten combat missions against the enemy over Korea. His missions were in a slow unarmed observation aircraft where enemy fire was received and/or expected over Korea. These flights were instrumental in finding the enemy and spotting for our men.

Mel was a Marine Fighter pilot during World War II and after recall he flew observation “Grasshopper” aircraft in support of the ground units of the First Marine Division.

With this article we learn that Melton loved animals! The paper tells that his parents had heard from him during a hospital visit about two weeks before this date and he sent a photo of himself with his dog Chi-Chi, a Japanese dog. He also mentioned he had tame ducks, several chickens, another Korean dog named Kimpo and other animals that had wandered into camp.

Aren’t we glad people put all of this stuff in the paper to share with their town friends. Now we have a wonderful history of some great family members. It has been a delight to find so much detail and history! 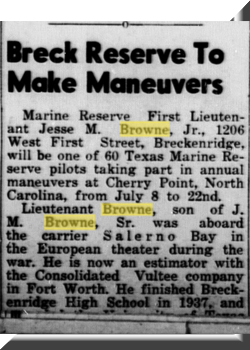 The article title is Breck Reserve to Make Maneuvers . We learn that Marine Reserve First Lieutenant Jesse M. Brown Jr. of Breckenridge was one of the sixty Texas Marine Reserve pilots that took part in the annual maneuvers at Cherry Point, North Carolina from July 8th to the 22nd.

He was aboard the carrier Salerno Bay ( see picture below, he is landing the plane) in the European theater during the war. He was working as an estimator for the Consolidated Vultee Company in Fort Worth. 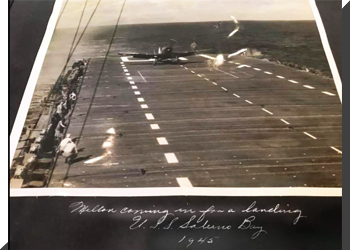 Part of the paper was folded and I could not read the last sentence but just think of all the information gathered in each of the little clips of each newspaper. What a great story of this young Marines life!

The paper has an article about Lieutenant Brown Jr. of 1206 W. First street returning to Hensley Field, in Dallas on August the 7th. It also stated that he will then travel with a flight of 45 Marine Air corps planes for two weeks doing maneuvers at El Toro, in California.

More Information to be found – The Breckenridge American Wed. March 24, 1948

“Mel” as he was called was a fighter all around it seems. In another paper I found where he is trying out for the University of Texas boxing team. Fighting in Austin, Texas on March the 24th, in the 145 pound class. The match was called a crown at the 18th annual intramural Fite Nite Wednesday. He went up against James E. Lanue of Houston. 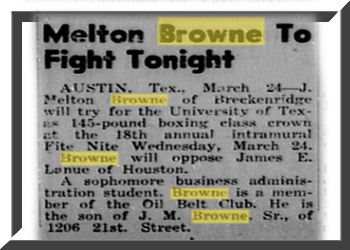 Mel was a sophomore business administration student and member of the Oil Belt Club. He lived at 1206 21st street in Breckenridge.

Here I found another little two inch box stating that Melton would be returning to Austin on Sunday to resume his studies at the University after spending two weeks at his parents for a holiday. He also say his sister and her family. His brother Kenneth that is employed in Fort Worth was also there during the weekend.

This article or little box in the paper said only “Melton Browne of Dallas and Kenneth Browne from Ft. Worth were home over the weekend. But just this little note tells such love and family strength. Both boys home visiting their family.

Eob Crudgington and Dave Albertson are also mentioned in the article, along with Melton Browne and Loy Mead. Such great information and history here. I hope someone kept something from the boxing ring for their memories.

This article tells us that Mrs. J. M. Browne had received a telegram from Melton and that he had arrived in San Diego and that he was in hopes to be home for Christmas! These little things right here are what

WOW, the more you dig— the more you find! And those of you that follow me know that once I start, I’m on a major mission!!! 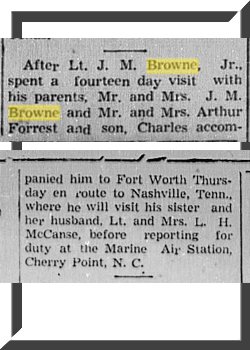 In this newspaper article or little tid-bit as I call them, Melton was able to go home and visit with his family. He was still addressed as a Lieutenant at this time. This paper stated that he got to have a fourteen day visit with his parents and sisters family. I have now learned his other sisters married name and her husband’s first name.

The same sister had a son named Charles. I  believe that Mel were visiting the other sister and her husband in Tennessee, Lieutenant L. H. McCanse. Then he went to another Marine Air Station in Cherry Point, North Carolina.

Afterwards, they all take the trip to accompany Mel to Fort Worth that Thursday where he was in route to Nashville, Tennessee. 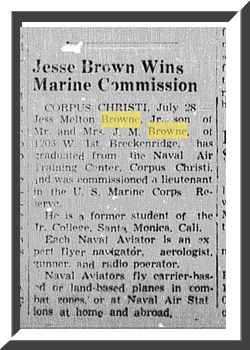 This article is titled: Jesse (Melton) Browne Wins Marine Commission. Its reads, “Corpus Christi, July 28, Jesse Melton Browne Jr. graduated from the Naval Air Training Center.” Then it goes on, “and was commissioned a Lieutenant in the U. S. Marine Corps Reserve.” The article states that each Naval Aviator is an expert flyer, navigator, Aerologist, gunner and radio operator. 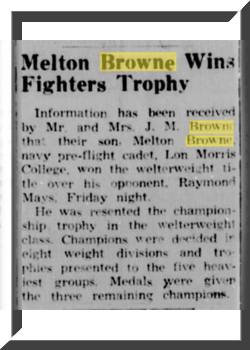 The next article is titled: Melton Wins Fighters Trophy. The paper stated that information has been received from his family that the Navy pre-flight cadet of Lon Morris College had won “the welterweight title” over his opponent, Raymond Mays on Friday night. He was presented a champion trophy in his class.

Amazing! This demonstrates the value of newspapers! I have learned so much about this young man.

Mel was one of the 22 students added to the Breckenridge High School Honor Society at the end of his Junior year. My tip here, when searching through newspapers always look at each page. I almost missed this little snip. Also, learn how the search is working on that site! It seems that almost all work a little differently and it could cause you to miss some great information.

It looks like I could go for several more days with newspapers on this wonderful man. So I will continue to help with his family tree. Also. every single piece of information found in this story of mine was found in the Breckenridge American. You can go there to find more on this or anything you found interesting in this writing.