Astonishing Information You can Find About Family Members from Old Newspaper Clippings, including Mrs Martha Bass of West Randolph Vt.

Awesome find in the Buffalo Morning Express from February 24, 1895. “The Energy of Girlhood. It is restored to Mrs. Bass by Paine’s Celery Compound.”

I think I may need to go find some of this stuff right now. I wonder if anyone has a photo of Mrs. Bass anywhere out there? Below is what the paper said she had to share back in the 1800’s.

“Yes, the air is pure and wholesome here and you would think we all ought to be healthy, but we are not. I, for instance, was threatened only a short time ago with a fate compared with which speedy death is a mercy. The speaker was Mrs. Martha Bass of West Randolph, Vt., who looked perfectly well as she spoke. Urged by her puzzled caller to give particulars, she said. It was the nervous trouble that overtakes many of us who work hard and are getting along in life.”

“Sometimes I felt a trembling of the lips extending to the cheek and to the tongue, on one side of the face only. I found it hard to speak and a twitching of the muscles in my hand annoyed me. I often think what a work of suffering I might have prevented by beginning to take Paine’s celery compound then. I never dreamed that I was on the verge of a lining death called paralysis.”

Sometimes I don’t think things have changed very much at all over the years!

“I went right along from bad to worse. I was listless and dull at times, while at others my fingers twitched and twirled and I could not keep still for a minute. I did not sleep well and often felt so fidgety that I thought I could almost fly. The muscles of my neck and shoulders would stiffen unaccountably.”

“All this I told my doctors, who prescribed one thing after another. I tried to think that their medicines did me good, but as a matter of fact, I lost ground and I believed the time was not far off when paralysis would kill one half of me. How does it feel to be half dead?”

She found the answer, peddle some tonic 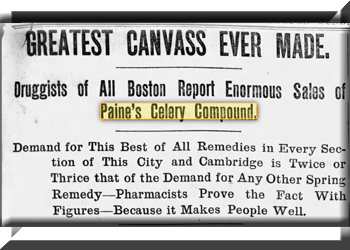 “Thank God, I can’t answer, for when other remedies failed I began with Paine’s celery compound. I didn’t have to empty bottle after bottle before getting relief. The first one did me untold good. I slept well and ate well. I grew strong of muscle and steady of nerve. The bad feelings are all gone and I do as much housework as when i was twenty. All thanks to Paine’s celery compound!”

I can hear her voice saying all of this as I read it!


Everybody knows the threadbare proverb about the ounce of prevention, and prudent people will take Paine’s celery compound at the first approach of nervous weakness. In the last stage of paralysis the face is drown out of shape, memory and power of attention fail, and half the body, from head to heel, is to all intents and purposes dead. “

From a fate of which only a faint hint is given here, Paine’s celery compound has rescued a host of men and women, who are strong, healthy and in full possession of the glorious faculties that raise man above the level of the brutes. Where is another medicine of which this can be said and proved.”

Martha Bass was born around 1825 and was living in Randolph, Orange, Vermont.  Her husband was Eliezer, and if I have the correct Martha Bass then she is about 70 years old at this time. If all is correct she had a sister by the name of Mrs. Cynthia Hubbard. Well, looks like she may have had something going for her. She lived to be 90 years old, 4 months and 22 days. One of the family members was a peddler and he was probably the one peddling the celery tonic.

“A party of seven elderly ladies gathered at the home of Mrs. Martha Bass, Wednesday afternoon of last week to remind her of her eighty-seventh birthday anniversary. The combined age of the eight ladies was 559 years. Refreshments were served and a pleasant time enjoyed by all.”

“Mrs. Martha Bass died at 3:30 p.m. Wednesday, November 11, after being confined to the bed since September 25 when she fractured her hip. Martha (Morse) Bass was born in Randolph June 21, 1824, and was the last of a family of eight children, two of her sisters having died during the year. She was married February 8, 1843, to Eleazer Bass, who died March 31, 1904.”

“Four children were born to them, all of whom died many years ago. Two years after they were married they built the house where she died, and where she has lived for 69 years. The funeral was Friday, November 13, at 1 p.m., Rev. Guy Crawford officiating. The bearers were three grandsons, Daniel, Charles and Carl Bass and E. A. Morse. Burial was at Randolph in the family lot in Southview cemetery.” 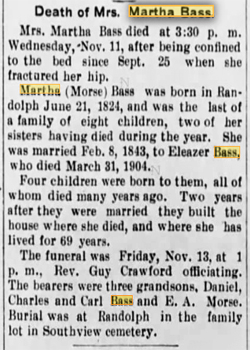 I think I’ll go out and look for me some of that celery tonic! She outlived her siblings and her children!

I found a couple of photos on ancestry that look just like her at a younger age, but it was attached to someone else. The reason I believe I have the correct person is the census records stating that one of the family members was a peddler.

The best source that is so under used on the web for finding stories and putting things together is the newspapers from the time period. They tell the story that most just try to assume or guess at. There were several Mrs. Martha Bass, living in Vermont. And a couple around the same towns or areas of Vermont. And I could be perfectly wrong. But I believe I have the right lady that goes with this picture because of the facts found.

Crazy facts found in the papers

Daniel Bass, her son “was unable to work at the White Cross Saturday and Sunday because of blood poison in his hand.”  The Herald and News April 21, 1910.

The Bethel Courier September 17, 1891. “Herbert J. Bass, a druggist from Boston, is in town on a vacation, the guest of his parents, Eleazer and Martha Bass.” (another son, and another point chalked up for the tonic) 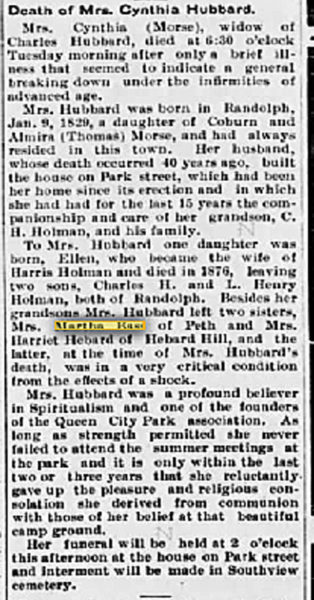 Mrs. Cynthia (Morse), widow of Charles Hubbard’s obit write up is in the paper as well. She was one of Martha’s sisters. She died and left two sisters, Martha and Harriet Hebard. From the Herald and News March 19, 1914. 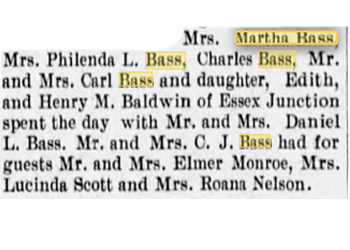 This little piece is from the same newspaper and everyone is having family over for the holidays. This one gives Daniel’s middle initial.

I believe C. J. is Carl Bass. He is also in the papers a great deal.

There is so much untapped information in the newspapers.

Maybe this will entice a few people to read and adventure out into the newspaper genealogy finds. Because there is so much you are missing about the families lives. You will be so surprised at what you can really find in there.

The Herald and News on April 30, 1908, wrote, “Carl Bass moving into the Hibbard house and is erecting a henhouse on the lot back of the place.” Little things like this give you so much of the bigger picture.

I hope you enjoyed meeting Mrs. Martha Bass and successful hunting for your next family member, just remember to look in those newspapers! Go find the rest of the story.