That Little Store Still Intrigues Me

Wow, I’m still reading about that little store of Trice and Altman! The Library of Congress is an amazing place to find newspaper articles. I have logged five years of articles about the little store so far. No, I don’t keep everything. But I save enough so I can get a good understanding of what was going on at the time. Not only have I found out all about the store, but back then the newspaper told about everything going on. From your daily life, trips, and every single time someone were sick.

Almost every paper I looked at for information about the store brought new information about the family. Members of the family were involved with the store while another was involved with the newspaper. (I’m happy he was, it is almost like finding someones journal or diary! When you do this search don’t put in the persons full name. You may be eliminating other family members from the search. I only put in the last name. I also narrow the search to a few years at a time so to not become so overwhelmed. Then I can just read a few years at a time each night. 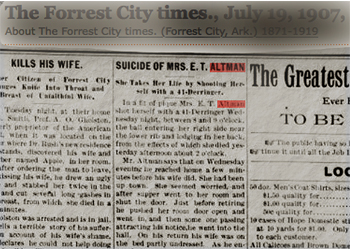 I love the feeling of being on a roll, wow it is paying off! I have found out when someone had the mumps. When the marriages took place and everything that happened that day. I found a mistake in our tree and had to redo some of it last night.

One man had one wife and I had found other marriages and could not put some of it together until last night! His first wife had committed suicide. Now I could fill a hole in the puzzle!

She was young when they married, only sixteen. There was a write up in the paper from when they got married and then just a few short four years later she shoots herself with a 41-Derringer. She was just twenty years old at the time!

Once you start reading about your family members in the paper you are mesmerized by the old newspaper ads they had in those days. Some of the crazy items, and those low, low prices. Staying at a hotel for a dollar a day, or a meal for twenty-five cents. There was a popular beer ad in the paper that we still know today (that ad is from 1903). Along with many other items that have come as a surprise.

This week has been great! I have picked up so much. Be sure and watch as you read for other family member’s surnames. Some of these little snips of information came in the form of Mr So and So going to visit his brother or Aunt at such and such place.

I then had more names and places where they lived. This made for some great conformation for my tree. Sometimes the census can be a little tricky because it is only going to show where someone lived every ten years. You may get lucky like I did and find out the exact day they moved. Happy hunting!