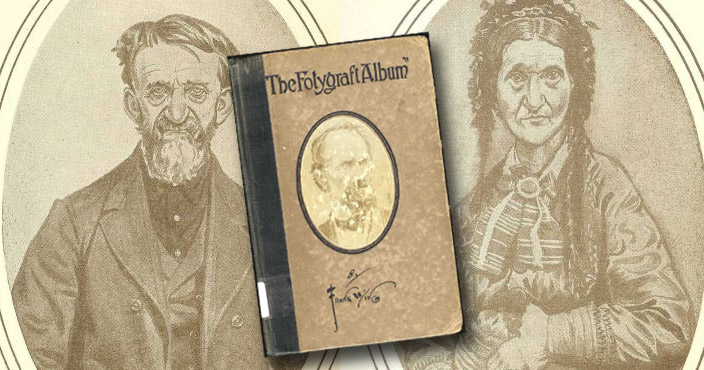 Most recently I sold used books that were donated by the community. I find many books interesting reading, but one caught my eye.

It was a really ugly book, but when you looked inside, the book looked like an old photograph album. It was called “The Fotygraft Album” by Frank Wing (published 1915-1919) and can be downloaded free. The author uses a young girl to tell stories on neighbors, relatives and friends. Frank Wing also illustrates a picture for each person the young girl talks about.

I thought of it when I was telling a cousin about the vintage books we get in the used book store and in particular I noted this book by Frank Wing to her. She tells me Frank Wing, the author and illustrator, is in our family tree and that in the book he pokes fun at his neighbors and some of our family members. My cousin’s sister, the family historian, goes on to give me examples of how this noted cartoonist pokes fun at characters in the book and their connection to our family. The author gives enough truth in his writing that any family member would be able to see the family “resemblance”.

I noted that he used the names of local towns in his book: “but now they’ve moved t’ Yates City.” ;“That’s my little cousin, Johnnie Aiken, down t’ Brimfield.”; or “He’s principal of th’ Ellumwood high school…”

It turns out that Frank Wing wrote another book called “The Fambly Album” The “Bigger Album from Upstairs” (published 1917) which can be downloaded for free. This book a co-worker gave me when she found out the author was in our family tree. Again the author clearly makes fun of many family members and uses area towns in his book. My friend who gave the book to me told how their kids would laugh and laugh when reading the book aloud.

Frank Wing had a notable career as a cartoonist and is said to have mentored Charles Schulz of Peanuts fame. So I can’t help but wonder if at the time the books were published 1915-1919, were family members proud because their famous relative included them in his book, even though the cartoons and funny stories were at their expense, or were they angry? My cousin, the family historian, notes that no family member mentioned Frank Wing and he really was pretty famous.

Hmmm… that may be the answer.

If not for my cousin, I would have probably missed the family connection in these books.

Have you found a published book that gave clues to your family history?