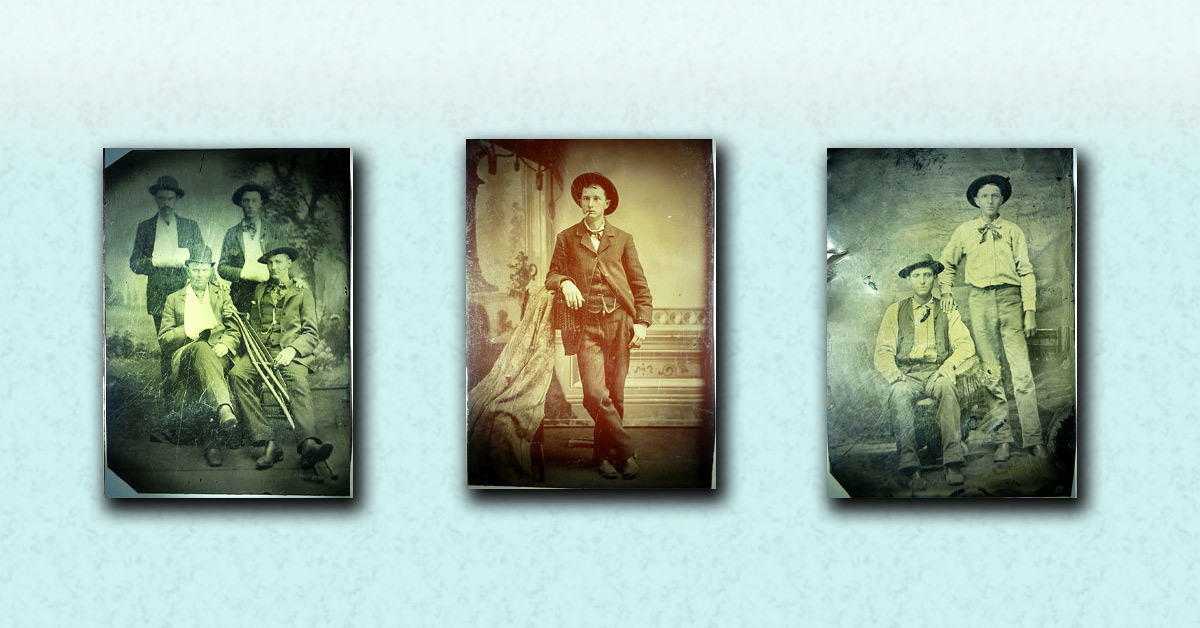 A few little dating tips regarding some of the photos found.

Hopefully this will be helpful to some of you while going through some of your family photos.

What can the photography type tell us about the time it was taken?

If I remember right the photos below were used during the 1860’s and 70’s. Usually the photo was taken by a traveling photographer. They could be made and ready for the customer quickly.

There are many Civil War photos and western type scenes due to the nature of the traveling and being able to go take the photo out in the wild. 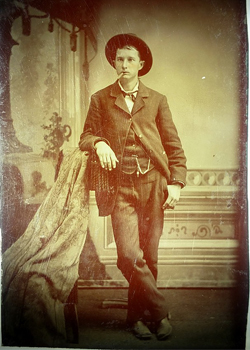 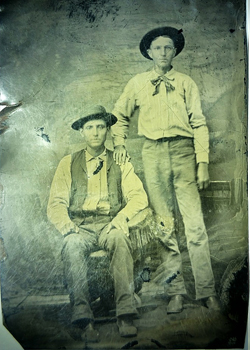 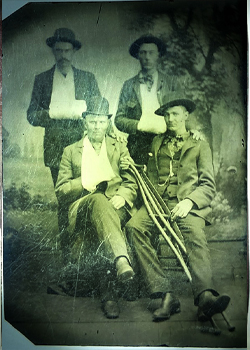 Another interesting fact is that they are mirror images. So what we think looking at the photo as a left hand is really the right hand. Sometimes you can find a women’s wedding band and see which hand it is on. This is always a great discussion.

In the photos above I’m not sure if they are different colors because of the varnish applied after it is made or what. They all looked the same with my eye, but after I took the photo of them to upload they look different. Maybe I can learn during the research on that.

CDV’s ( Carte de Visite) appeared around 1859 and you could buy several copies of the photos. The photo was a very thin sheet that was glued to a heavy card and is 2 3/8 by 4 1/4. This is an easy photo to date because of the corners of the card stock. Square corners were used up until 1870.

There are some dates that can be used here because the smaller the picture or image the more forgiving it is as far as not being very sharp. if the photo was about one inch you can date it at between 1860 to 1867, and if one and a half inches from around 1865 to 1872.

Dates are always going to overlap because of the ability of the photographer to update his equipment. If the image is only around one and three quarters of an inch it can be dated around 1874 to 1910. After that the image is usually covering the full card space.

This was around 1866 and is also a thin paper glued to a heavy card. The beginning ones were mostly sepia and later they were black tones with some silver cast. The most common size was apx. 4 1/4 by 6 1/2 inches.

Things you can do is look up the photographer and use that as a date source as well. That is if there is a marking or stamp on the photo on either the front and or back. Nothing is going to be absolutely perfect for an exact date. 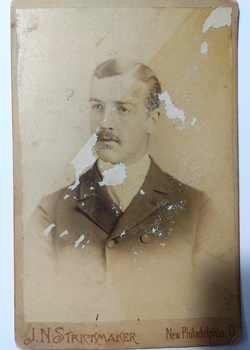 Different areas changed, larger cities updated faster to new styles and equipment. Photographers would come and go and move with the work and the demand.

I am by far no expert on the photos over the years but you can look things up and get help online from specialist if the general dates are not close enough. Most all dates overlap on the techniques were used but this can at least give a general idea for a time frame.

Many times there are clues in the photos to as least compare to see if the photos you have belong to the same person at a different time in their life. In many cases the relatives look so similar it is hard to know if the photo is of the next generation. It can sometimes be the same person. Ears and noses are easy identifying characteristics.

The way a person holds their head and shape of their eyes sometimes will help. I have also noticed that hair can help. Parts usually did not change in their hair and most usually did their hair the same way all through their life. Totally different than today.

The best place to go online if you need to study the photo and try and date it is photo tree.com. They have extensive descriptions and identification factors that can help with dating a photo more exact.

There is also a section describing how to take care of the photos once you are ready to store them away. There are also books available if you are interested in becoming a serious collector of old photos or if you would like to read up on the family photos you already have.

No date can be exact but the rate of the postage has changed over the years and hopefully you can read the post office markings to know when the item went through the mail. Old post cards can tell you a great deal. You can end up with a list of friends and family and when events happened. 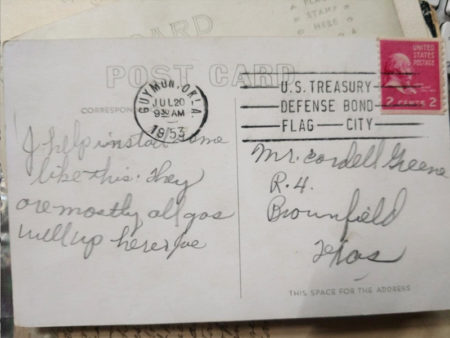 Now the sizes differ a great deal and they will be hard to determine the year. If you look at the post card above the words postcard were not printed on the cards until December of 1901. So any card before that had “Private Mailing Card, Authorized by Act of Congress of May 19, 1898”. The card would be date from between 1893 to 1901.

White borders on a picture would be date between 1915 and 1930. Post cards with a texture and no border will most likely be date about 1930 to 1944. These cards usually had very bright colors compared to the older ones.

* The Linen cards were dated 1930 to 1945, these were cheaply produced and used the terrible dyes that left the cards looking dull.

These are all just examples and there are experts on line that can give exact dates. But hopefully the postage marks are there to help with family time frames making it good enough to help locate family for our trees.

My mother’s first little camera! She took pictures all her life, from one of the little Brownies till she passed away and was using a 35mm camera. And to celebrate her I still have her little Brownie and will keep it forever. That will be on of those items used to tell her story in my family tree. Why, because she took photos all her life and then passed that love on me as well as the love for genealogy.

All of the family photos I have that she passed down were all taken with that little camera. Through the end of the 40’s all the way through the 50’s.

This is a few of the negatives I found that I believe were from my mother’s little Brownie camera.

Little pocket cameras using film started around 1898 and had a negative that was about 21/4 inches by 3 1/4 inches. I still have some of these beautiful negatives.

One of the first little Brownies was out around 1900 and only cost one dollar. And the amateur photography was born.

Be sure and be careful with your negatives and not get finger prints on them. I also have gone through all of my mothers negatives and removed them from the holders that the printing shops put them in years ago. My mothers were in plastic holders that were just turning to dust and falling apart. I had trouble even getting all the particles off of the negatives.

So go through things before they start to deteriorate and save your family history. Put the negatives up in a safe place encase you ever need to have the photos reprinted.