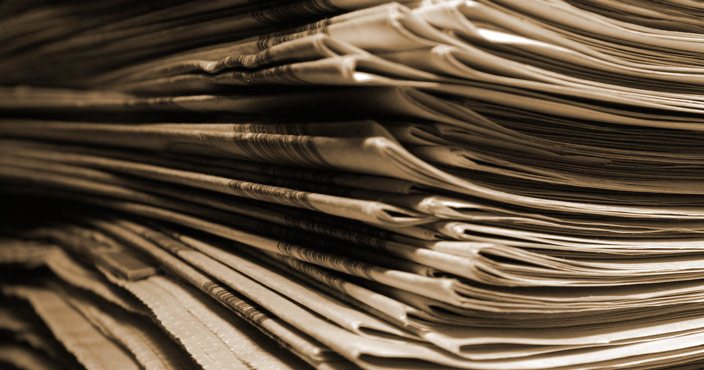 Our first amendment right gives us such treasures in the newspapers: from the past and those of today! Genealogists can enjoy the benefits of hours of researching in actual original newspapers, microfilm, online, local genealogy libraries, or personal collections.

Newspapers are a good source of pictures.

I found a picture of a relative (d 1902) with a news article about his death and was fascinated to learn the passenger train made a special stop near his home in the rural county in order for people to attend the funeral services. The picture was the only one I have found so far; so it’s significant.
My husband loves to look at old sports pictures from the newspapers, especially the ones from his high school and college sports teams. These tell a story about him and those are important to keep too.

Who doesn’t like to see their picture in the paper?

It was fun to read about my grandparents’ elopement (1926) in the local town’s newspaper. The paper claimed my grandma (b 1905 d 1985) “is a charming and accomplished young lady, well fitted to preside over a happy house”. Also reported was the “rousing charivari” given to my grandparents where about 200 of their friends drove out to their house to “wish them bon voyage on matrimonial seas.” Ice cream and cigars were served!

I know you have a story just like this!

Seeing the advertisements of my relative’s businesses make them seem more real to me. Some include lumber yards, banks, grocery, and a weaver. I was thrilled to see an announcement of my grandpa’s orchestra playing at a local dance hall. These are easy to digitally “clip” from an online newspaper and save. I have to be careful to document the source though. It’s so easy to get excited about the find and lose the source! One of my favorite ads was for groceries with a title “Still Hollering”. The text said “You’re awful busy but you just had to look up and see what was goin’ on when Claybaugh got to hollerin’ out loud…” and on it goes for 4 paragraphs. Then it says These Prices Good Only on Saturday. What a strange ad! My grandpa had a store with an advertised theme “where you get what you like and like what you get”.

What goods and services have you found your relatives sold?

Board for Certification of Genealogists: “Skill Building: Using Newspapers Effectively”-http://www.bcgcertification.org/skillbuilders/skbld039.html