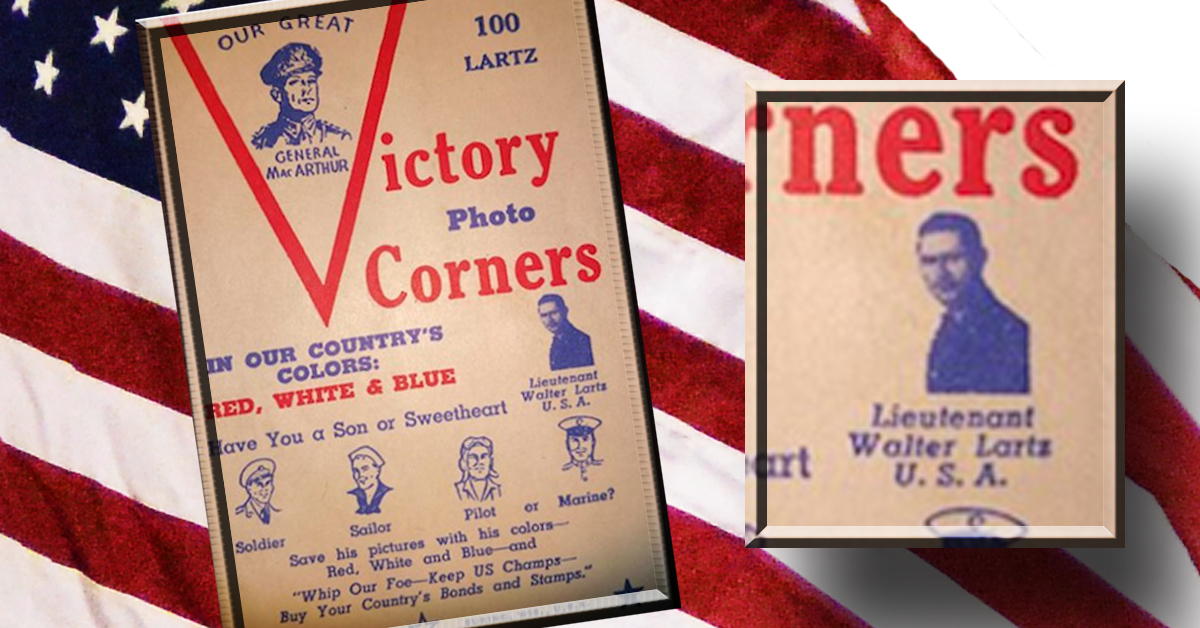 I love old things, and the military stuff is very intriguing to me as well. I had this old little envelope that I found in one of the many scrapbooks that I have collected. As I looked at it closer today I noticed a picture of a Walter Lartz on the envelope. So, the search was on!

Was this something the company did ever so often? Did they pick a random person from the War like this Lieutenant to put on the envelope? Then I noticed it said “100 Lartz” in the right hand corner. They are calling the corner tabs Lartz! This means the company name is Lartz maybe. So off on another search to see.

Lartz Company Advertising WW2 1942 Victory Photo mounting Corners! Well so far not much to go on. My Google search only brought up another envelop that sold on Ebay for ten dollars. On another search I found one that sold for $28.99. This one looked older and had no date on it like mine, but it gave me some new information.

The Lartz Plant, was in Suring, Wisconsin. This one didn’t have War pictures on it and originally sold for 10 cents, for one hundred of the corners in the envelope. Another site had two of the envelops for sale but they both had different photos on them and no help at all as far as help with the company. So now off to do some reading on my trusty newspaper site.

Well, not fruitful at all with the newspapers. Over twenty newspapers on that site and absolutely nothing on the business that made the photo corners. So on to other sites. I did some more Google searches for the Lartz Advertising company and I’m not getting very much at all. So back to the newspapers again to look at some advertising in Suring, Wisconsin and see what I can come up with. I did a search for the Lartz Plant, Lartz Advertising, Lartz Photo Mounts, and still nothing!

Back to looking for Walter

Well, I guess if I can’t find the business to learn more about it I will move on to Walter. In my reading I have found many men with the name Walter Lartz. Not as many as I seen before with other names, but maybe I have found the one in the picture.

Out of all the research I have done, there is only one man that was in the service long enough to become a Lieutenant. Although the last information I found only showed him to be a Major in Infantry. But look at that likeness in the photos side by side and it sure looks like him. 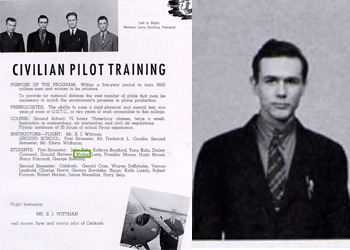 Walter Peter Lartz lived to be 90 years old and passed on December 7, 2009. He was born in 1919, in Chicago and later his family moved to Suring, Wisconsin.

He was born in Cook, Illinois according to some other information. But it is the same person and birth date.He married his wife on November 17, 1945 in Green Bay, Wisconsin.

His enlistment date was January 1, 1939. So, it looks like he is in the training program discussed above by the photo. Then he is part of the war, goes off to war then comes back and is part of the Army Reserves and teaches at the same time.

I found another newspaper article from the Waukesha Daily Freeman in Waukesha, Wisconsin dated January 2, 1946. It reads “Word has been received that Walter Lartz, 319 N. Grand Ave. has been promoted to the rank of Corporal. He is serving with the Army Air Forces in India where he has been stationed for 12 months. Prior to entering the service in April, 1943, Lartz was employed by F. W. Woolworth co. of this city.” 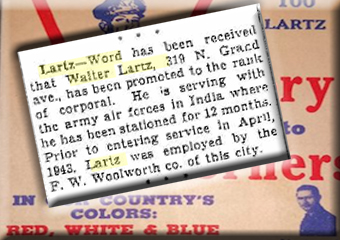 There a good deal of discrepancies in the enlistment dates but according to all the information it looks like it is the same person.

This article shows him as Capt. Walter P. Lartz in 1954 S-4. He is on the right shaking hands with Lt. Col. Ballschmider commanding officer of the 2nd Ba. 339th Inf. Regt. 84th Inf. Division.

During WWII he served in the Army infantry, Red Arrow Division. He fought in the South Pacific on the front line of the Battle of Buna in New Guinea and was wounded and received a Purple Heart. He retired as a Major according to this obit and retired on July 28, 1975, according to one of the obits I found on him. I only found two obits about him and they both had about the same information. 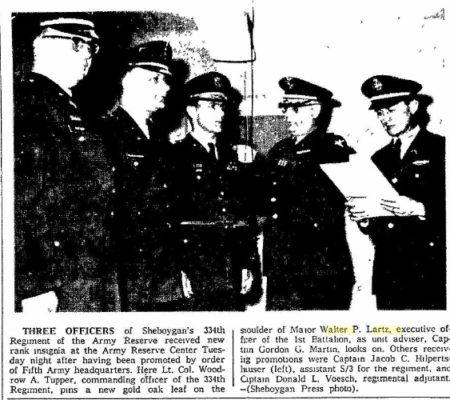 Another pic from the Sheboygan Press dated February 8, 1961. “Three officers of Sheboygan’s 334th Regiment of the Army Reserve received new rank insignias at the Army Reserve Center Tuesday night after having been promoted by order of Fifth Army headquarters. Here Lt. Col. Woodrow A. Tupper, commanding officer of the 334th Regiment, pins a new gold oak leaf on the shoulder of Major Walter P. Lartz, executive officer of the 1st Battalion, as unit advisor, Captain Gordon G. Martin, looks on.”

After the war Walter became a teacher in Sheboygan Public Schools in 1961 teaching Science according to one of the obituaries I found. But after the war I believe he was a part of the Army Reserves and teaching at the same time. 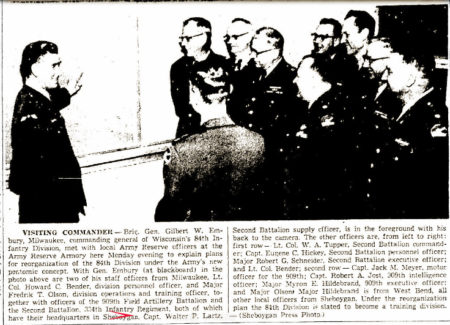 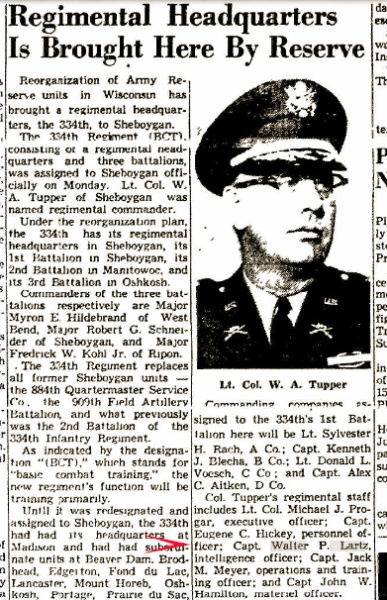 I found some of the information on the obit link listed below but I still never found anything that said Lieutenant like on the envelope. Maybe I just need to come back some day and dig a little deeper.

I wish I could have found out more about the envelope and the Lartz Company Maybe the next time I try something will come up. In the meantime I am proud to know about this man and his service.

Remember what I said a while back about dropping everything and coming back. It all just fell into place. ( because I just could not let it go.)  I kept going back and looking for more! I believe he was going to the teacher college and was called away for the war. The obit I talked about earlier talked about the Purple Heart he received. This last newspaper entry I will add tells me where he was wounded. Now it all falls into place. And guess what…. it finally states that he is 2nd Lt. Walter P. Lartz. It also looks like his father George F. Lartz of Suring was wounded also.

Now I feel like I know him. Thank you all for your service!