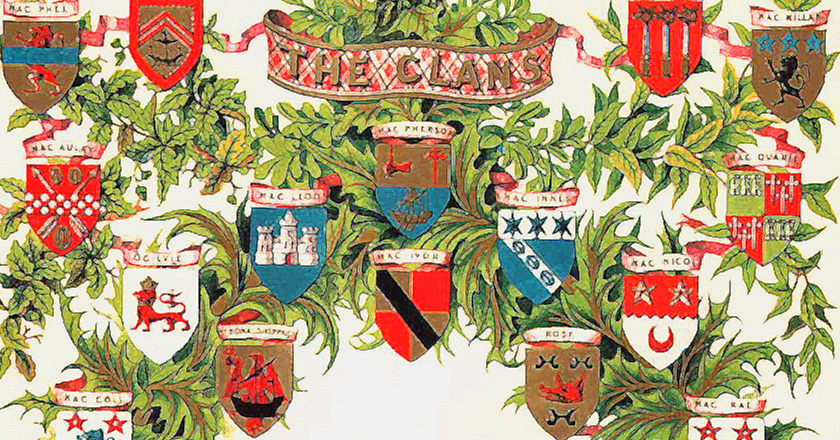 Having spent several weekends at highland games this summer, assisting people with their Scottish genealogy research, likely the most common comment I heard was,  “I’m not sure what clan I belong to“. As simple as the question seems, the answer is a tad more complicated. You see, most people think that a clan is a family and implies a family connection, but that just isn’t so. Let’s have a wee look at just what a clan is.

Here is a definition from BrainyQuote:

Clans really are communities, similar to a Kibbutz in Israel or a commune in Haight-Ashbury, or a sorority in University. A group of people who choose to belong to one another. A collective of individuals with a common purpose.

It is a common misconception that every person who bears a clan’s name is an actual descendant of the Clan Chief. Clans are simply groups of people who unite together in loyalty to the battle Chieftain.

While Scottish clans can provide those with a common surname a sense of identity, in reality, surnames were fairly irrelevant to the early highlanders and they would switch their names according to their loyalties at the time. This was especially true during times of battle, and battles were a frequent part of the history of Scotland. Most clansmen took the chief’s surname as their own to show solidarity, for basic protection, or even for simple survival.

The word clan is derived from ‘clann’ meaning ‘family’ in the Scottish Gaelic language. When people take this as a literal translation, they can become disillusioned to discover they are not able to establish that they are related to the Chief. Or that they are barking along the wrong genealogical line in automatically assuming a blood relationship. Some clansmen were related of course with marriages happening within the clans, but many were not actually descended from the Chieftain. DNA will not necessarily show your relationship to the Clan Chief. In any clan, it is the allegiance that is significant, not the blood relationship.

In the days when allegiance to a clan chieftain was a matter of survival, you could not belong to more than one clan. The clan system essentially died in the aftermath of the battle of Culloden. Following Culloden, there was a systematic effort to suppress the Highland way of life.

Thanks to Sir Walter Scott and the Highland Society of London, the wearing of tartan started to see a resurgence. And other pieces of highland life started to also emerge once again. Today, since there is no need to pledge allegiance to one clan and one clan only, based on survival (food, shelter, protection), it really is quite possible to belong to more than one clan. Few have rules that preclude membership in other clans. So, if you want to belong to the clan society for every Scottish surname in your ancestral tree, you certainly have a right to do so (again, depending on the clan society’s membership rules). Most people are happy to have membership in one or two clans (surname of a maternal line and a paternal line, perhaps). And as for tartan, the only rules are that you can’t wear the tartans that have restricted access (the tartan designed for a clan chief, royalty or other rare selective tartans). Otherwise, it is open game. Wear the tartan that you associate with, the tartan whose colours you most admire or whose cause you support. And wear it proudly.

To see a listing of tartans, their associations and the restrictions, if any, regarding who can wear them, visit the Tartan Register website at: https://www.tartanregister.gov.uk/