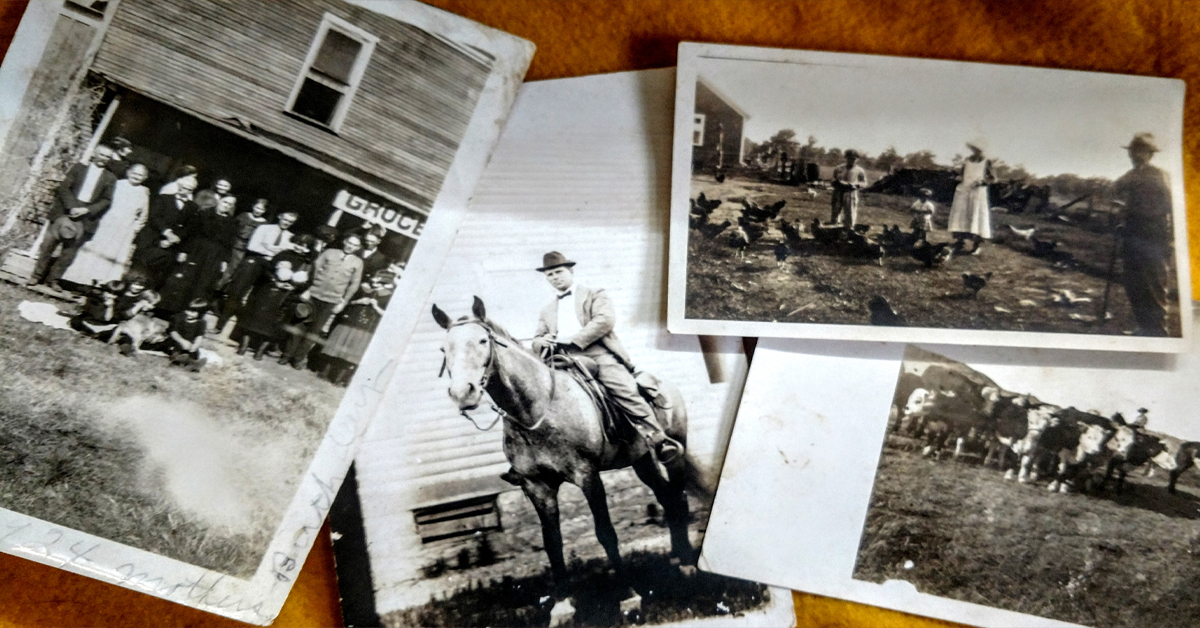 I love living in the country, being on a farm and growing things. These old photos are so “make me want to go back to the good ole days!” Hopefully we can connect someone to a face or a name. I have just been talking to someone online and I get to mail one of the lost scrapbooks to a place where it will be cherished! That is a good feeling.

So Here are Some of the Collection:

I love the pigs and the Jersey milk cow. I am old enough that we had one of these cows growing up in the small place we lived. My dad had to go out and milk it early every morning before he went off to work. So for the first ten to fifteen years of my life I had fresh whole milk straight from the cow. We also made our own butter.

I still have an old butter box used to press a large square of butter before it went into the ice box. Yes, I still say ice box all the time. I grew up hearing that. After so many years of my teaching career I sometimes say refrigerator do to teaching a cooking class for my last several years. The students would always catch me and want me to correct it, but you are who you are! And I am a country Texas girl through and through.

I love this old photo of the farm and the chickens. On the back of the picture it states Lawrence King, I believe the boy to the left of the picture. Flossie Giles I believe would be the little girl. That would make her Fannie Giles King’s niece. And Fannie King is in the awesome hat and apron feeding the chickens. I’m just guessing the man is her husband Fred King, but it is not stated on the photo. It does state that it is Fannie’s farm. No date on the picture, but my guess would be around 1900 because Lawrence looks to be around eight to ten years old. He also is shucking a dried ear of corn for the chickens.

This postcard of the two riders and all cows, one rider is male and one female. She looks really dressed up fancy too! The cattle are a White face Red Hereford. These type cattle were and are a large part of the beef program in the United States. There was no writing on the back of this one. It is sad because this is such a great photo. Always take the time to write on the back to let family know about the picture. If was important to take the photo, make it important to document what is was about.


What a beautiful old farm house! They have three little girls standing and another baby on mother’s lap. It may be a little girl as well. The old house is sitting on large slabs of stone and wired in with chicken wire to keep critters out from under the house. At least the larger animals. On the back of this postcard it is marked to Mr. Henry E. Pennington of Pasadena, California. And from Mr. Edward A. Pennington. There is no message just the names and no date.

These two photos are lucky to have all the names on the back. From right to left are: “Bessie Crocker, Celestine Lucas, Minnie Teagarden, Pyrlle Thotnton”. All copied exactly as written on the back. The next photo has two of the ladies in it sitting side saddle. They are the two on the right side where the man is pointing at them. On the back is written: Ruddy Lucus, Judge Humphrey, Gordan Roach, Willie Teagarden, Bessie Crocker, Minnie Teagarden, and Hamilton Roach.  Some of these should be easy to match up. They are either married or brother and sister. This could make an interesting story to look up! 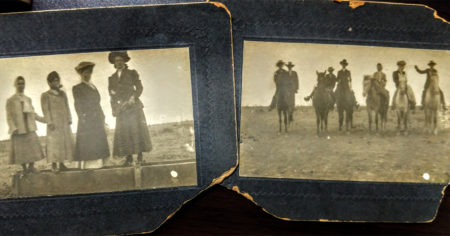 This one only has “Dolly” written on the back of it. It has been glued onto one of those black pages at one time. Sometimes that is all it takes for someone to put a couple of clues together and recognize even one person in the photo. The animals or the clothing that could be exactly like another photo.

Maude Elizabeth Fawver was born on Jan 24, 1876 In Molbe, Missouri. She married Emanuel Charlie Altman in Floydada, Texas in 1893. She had brothers and a sisters, and as she got older she loved to write songs. The way I heard things the whole family loved to sing and play music.

This is from the top of one of her songs she wrote. I love the old handwriting. It reads “The Girl I Left Behind” and is dated 1896. 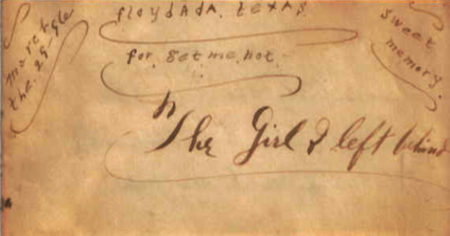 Here is an old post card and all that is on the back is “This is our new home, Jack” to G. Rapp.  A really nice house for sure, and a wonderful porch! 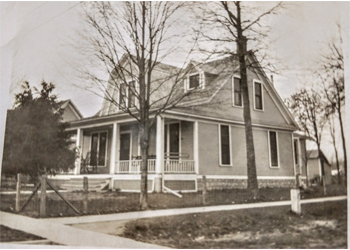 This says George, Clare and Bob (Hamilton). Those are the three children in the photo. 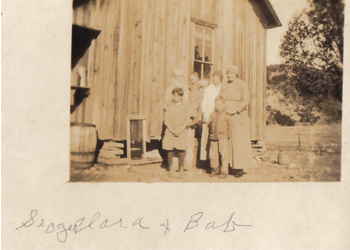 Fitch Hamilton and one of his sons coming back from town getting supplies. I was told they would be gone for several days and that it was a long trip. The boys would go with him, and they did the trip twice a year. That is like you and I running to the grocery store only twice a year. Fitch is on the left in the picture. They traveled to Graham, Texas. It would take several days to get there and they had to cross water. Once in Graham they would be there a week gathering supplies before heading back home.

I was also told that his horse was a very large Friesian horse. I think this is the oldest son in the wagon with the black dog.

This old guy is checking on his cattle. Sure looks like it has been a rough year even though the man is dresses nice. The trees look in poor shape and so does the ground.  Uncle Henry Johnson of Hico, Texas.

This is such a great photo. There is nothing written on the photo at all. He is all dressed up and it is such a great photo. I hope everyone will take the time to dig out your photos and start making notes on them. In one of my tip articles I told where I use envelope stickers to put on the back of the photos. Be sure and write on it first then stick it on the photo. If you look one photo up on the right where the man is standing in the buggy you can see why. If you look close at the top you can see the imprint where someone wrote on the back and you can see it on the front of the picture. 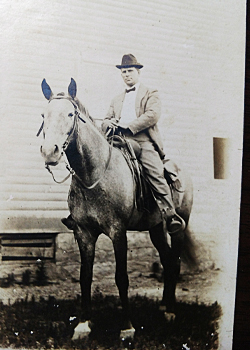 Hopefully you are finding the photos interesting and maybe we can help someone find a part of their family tree. Happy digging and searching, and write on the photos. Not just a name or a date but add the story for someone to read later on!