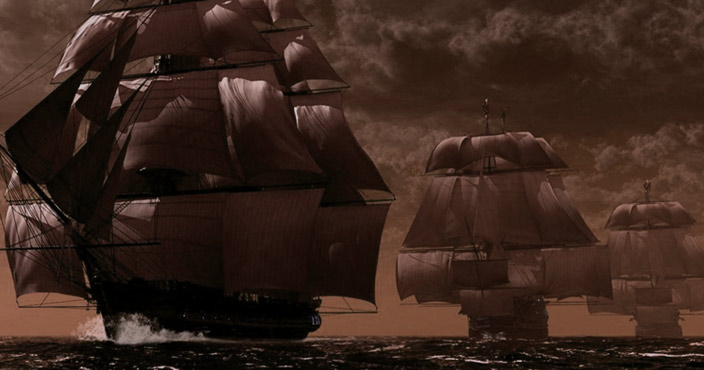 Prior to the 1800s, any of our ancestors who came from Europe or the UK, came on Merchant ships. These ships were purpose-built and specially fitted for transporting cargo across the Atlantic. They generally only carried sufficient food supplies for the crew, had few, if any, amenities and had large cargo holds to bring textiles, tobacco, pottery (china) and furnishings to the new world. Any documentation about the ship and it leaving its country of origin will be with the records of the Customs and Excise department for that country. These are now generally held in the National Archives for each European or UK country.

In the mid 1700s, some merchant ships were slightly altered in their design to allow the transport of passengers. Cots were added to the cargo hold. Additional, yet often insufficient, food supplies were taken aboard. Fees were paid to the ship’s owner and emigrants boarded and hoped to survive the brutal journey westward. Few records of the passengers were made and fewer still have actually survived. Again, any that survived are generally archived with the National Archives for either (or if you are lucky, both) of the country of departure and the country of arrival.

It wasn’t until the Passenger Vessels Act in 1842 that shipping companies were actually required to keep a list of the passengers they carried aboard, as well as any they may pick up along the way. No, no one was “hitch-hiking” in the middle of the Atlantic, but often the ships would travel to North America via the Caribbean to collect sugar, spices, rum and perhaps the odd slave or ten. In this instance, anyone boarding in the Caribbean, heading to the Americas were to be added to the passenger list.

The Passenger Vessels Act also required that a copy of the list be left with Customs in the New World. However, there was no requirement to have the list archived in the country of arrival. While some records in the US do exist, those in Canada don’t. Castle Garden opened in 1820 and those records, for the most part, have been archived and are available at Castlegarden. From 1892, the new immigrants were cleared through Ellis Island and those records can be searched at Liberty Ellis Foundation

It wasn’t until the 1870s that purpose-built passenger steam ships started making their way across the Atlantic with people bound for a new life in the new world. These records have all been archived. Most of the incoming passenger lists for the Eastern United States have been indexed and are searchable on Ancestry.com

and/or Find My Past

However, all is not lost if your ancestor arrived prior to the 1800s. Many genealogy researchers have culled other records (newspapers, estate records, customs records and church records, for example) and have re-created the lists of names of the people who immigrated. These lists are available for searching at: