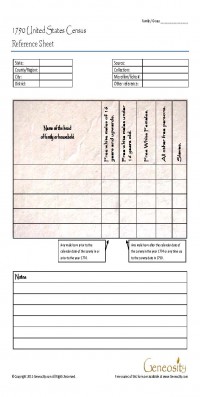 This reference sheet can be used by genealogists to record information found in an individual census image for a particular family.  Space is provided at the bottom of the form to record other information of use, and data complimentary to the census record that has been found.

This census was very general in terms of what data was collected as compared with later years.  The information listed on this census were: